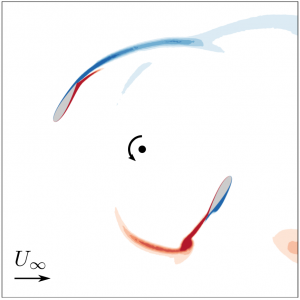 Cross-flow turbines, also called vertical axis turbines, differ from traditional turbines in that the axis of rotation is always perpendicular to the incoming flow.  This research is investigating the flow dynamics surrounding a straight-bladed cross-flow turbine under various confinement configurations, and under various control strategies. It has been shown that a time-varying angular velocity profile can improve the performance compared to a constant angular velocity, which is due to the change in relative flow direction and magnitude. 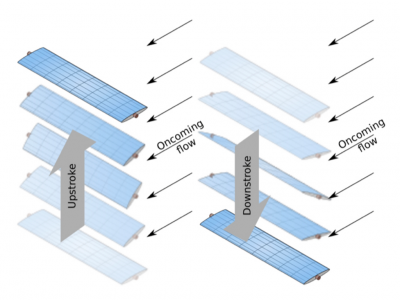 A heaving and pitching hydrofoil, or underwater wing, can extract energy from moving flows in a similar manner as a rotating turbine. Unlike a traditional turbine the swept area of the foil can be modified by changing its kinematics, allowing it to be versatile in various depths and flow conditions. Due to the slender two-dimensional blade operating at high angles of attack, coherent vortices are shed on the top and bottom of the stroke, leaving behind a structured wake.  Current research is investigating how multiple oscillating foils can cooperate in closely packed arrays to enable a higher energy extraction density. 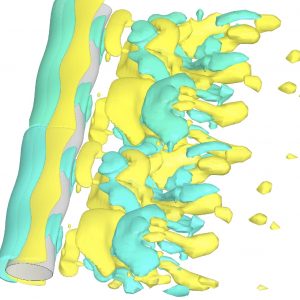 The unique geometry of seal whiskers – an elliptical cross-section with undulations in multiple directions – has been shown to significantly change the wake region resulting in reduced forces and dampened vibrations when compared with smooth circular cylinders. Biomimicry gives an opportunity to apply the unique whisker geometry to other areas of engineering where vibration suppression and force reduction is beneficial such as for underwater passive was detection. Using simulations, we are interested in connecting the unique morphology with the hydrodynamic and wake response. 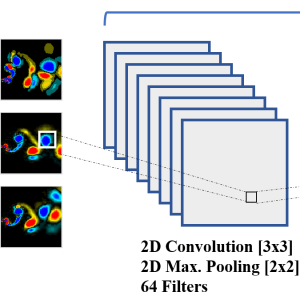 Machine learning methodologies are developed for applications in fluid dynamics, including the clustering, classification and identification of flow structures.  Given a large parameter space of variables that exist in a given flow regime, convolutional autoencoders are utilized to reduce the complexity of data and assist in the clustering of similar flows. These techniques can be used to identify dynamic events and can be used in building blended physics and data-driven models. 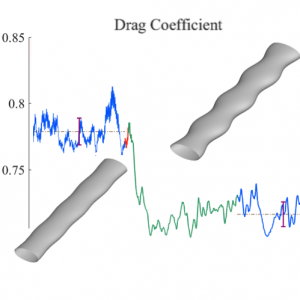 Flow control methodologies are explored computationally that can modify the performance or fluid dynamic behavior around a body.  Examples include modeling fluidic actuators (such as synthetic jets or DBD plasma actuators) or changes to the surface morphology that change the inner dynamics of the boundary layer, reducing drag or delaying the onset of flow separation.